My ancestor Eleanor Scrivener, who had married Edward Campion on July 2, 1795 in Potterspury, Northamptonshire, England had always been something of a mystery to me.

I knew she was born in 1769 from her age given at her death in 1837, and her probable place of birth, which was Potterspury, Northamptonshire. “She shouldn’t be that hard to track down,” I thought to myself.

But how wrong that assumption proved to be.

As it turned out, the parish registers for the nonconformist church for that period were missing, and as she was not baptized in the local parish church either, I had no way of determining Eleanor’s parentage.

Further research determined that Joseph and Elizabeth Scrivener (nee Devonshire) had children in that time period, having married in Banbury, Oxfordshire, England on April 5, 1759.

The first three children, Joseph, Robert, and Richard had all been baptized in Potterspury between 1760 and 1764, before the gap in the registers. I suspected that Joseph and Elizabeth were Eleanor’s parents, but how could I prove it?

That was when I had the eureka moment.

I knew that Joseph had been buried on April 25, 1807 in Potterspury, but had he left a Last Will? I looked in the will index in Northamptonshire Record Office for Joseph Scrivener, but unfortunately drew a blank.

Feeling despondent, I originally thought that this was where the trail would end. It was then that I thought I should search through the index for wills proved at the Prerogative Court of Canterbury just in case. With a sense of excitement, I typed his name into the index.

Bingo! There it was, proved on June 5, 1807. It was so exciting, and now I had to look at the will itself.  This was when I was so glad the wills had been put online. I could access the will instantly, rather than having to wait for the will to arrive in the post. 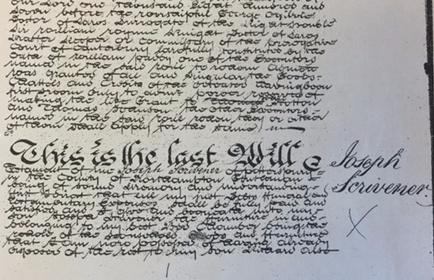 Frankly I don’t think I could have waited so long!

I eagerly scanned the pages, noting all the children that were mentioned in the will. First there was son Joseph, then son Richard, son Robert and then daughter Ann.

“Oh come on,” I thought. Where is Eleanor?

I carried on reading the will, finally coming across the name of ELEANOR! I had proved that Eleanor was Joseph’s daughter, so I could now go further on with my research.

Perhaps I had been lucky in that Joseph left a will and had given so much detail in it as to how much he was giving to each child, but I will never forget the moment of sheer joy I felt when I saw her name listed in the will.

The moral of this story is that if you hit a brick wall, like I had, look at all of the possibilities.

Don’t ever give up. Because you never know: one day you may have that eureka moment like I did.

Tell me about your “eureka moment” in your ancestry research.

Rachel Dunkley has 20 years of genealogy experience, her aim being to teach others how to become involved in this wonderful pastime. You can learn more about Rachel’s passion for genealogy at Family Tree Resources.