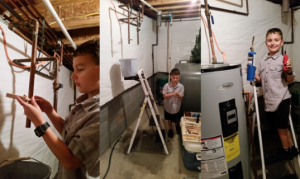 We got home from his Open House night at 2nd grade in the evening.  When we pulled in the garage, the door to the house was open.  Ania was worried so I went in to check things out.  Ryan followed shortly after.  We went into the basement and turned on the lights looking for an intruder.  What I found instead was a leaking hot water tank that was about to rupture.

#1 – talk about something you do NOT want to come home to.  and #2 – I will forever give thanks to Uncle Scotty for opening that garage door for us.  Had it not been opened, I probably would’ve never noticed.

Anyway, Ryan spent the evening with me and part of the next day after school replacing the heater.  He watched me work, I taught him some things, and he even did his own ‘plumbing’ work with his own toolset (which you can see on top of the cooler).  I obviously didn’t allow him to use the torch, but he watched.

Between the cost and the labor and the time, I was hating that I had to replace this heater.  But I also look at it as a father-son bonding moment that I will never forget.  And now that I’ve added the photos to his Footprint, he will one-day know how much of an impact this moment had on me.  In the end, I loved every single minute.