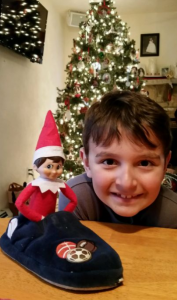 Lucky was the “Elf on the Shelf” Ryan really really wanted this year.  After he heard about all of his friends in school having one, he approached us with disappointment, wanting to know why he isn’t good enough to have an elf. We tried explaining to him that these elves are meant for kids who don’t behave, and that he is such a good boy Santa said he didn’t need one. But he was very sad and said he had been praying for an elf at night and asked Santa as well.

So Ania talked me into getting this for Ryan. And the elf was waiting for us after we came back from our Captiva trip. We had fun watching Lucky move around the house. All day long that’s all Ryan would talk about. He was talk to Lucky and couldn’t wait to see where he would move next.

As I write this it’s Christmas night and Lucky went home last night with Santa. Surprisingly Ryan has been OK with lucky leaving (so far) which surprised me because they were so close with each other.

I absolutely LOVED watching Ryan’s imagination run wild with this. Ania made a good decision bringing Lucky into the house. It was THE highlight of this Christmas season.