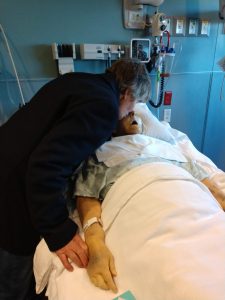 Just 10 days ago I had to call an ambulance to the house once again but this time it was for Nana. She was unresponsive and incoherent, the same group of paramedics came to the house that took Jeff when he was hiking his heart attack just a week prior.

They quickly got her to the hospital and when I arrived she was awake and looking alot better. I stayed with her until about 8am and when she told me to go home to get some sleep. I didn’t want to leave but I was exhausted from taking care of everyone and the stress that Jeff’s heart attack came with so I began to leave as they were coming in to transport Nana to her room.

I gave her a hug and kiss and she said to me “I love you and you better get some sleep” I said I love you back and asked what she wanted from home. A pair of PJs and a smoothie and then she repeated I love you but this time in Spanish. Not realizing this would be the last time I’d hear her voice.

Everyday I went back and forth to the hospital to sit by her side, check on her talk to the doctors and took my dad to see his wife. I kept him home during that time since he was having heart issues himself and was scheduled for surgery in a few weeks.

I get a phone call early in the morning that we all needed to get to th hospital. I quickly told everyone to get dressed and I would be back for them. I expected when me and Emperatriz arrived that she would be gone but she was still here. I went back and got everyone and we all stayed with her until that inevitable final moment.

Me, Jeff, Poppi, Max, Mya and Emperatriz were all by her side. Shannan and Nathaniel were stuck at the airport trying to get a flight. The only thing that hurt the most was having to tell Poppi that she was gone since they shut the volume off on the monitor. Also watching Max completely break down.

I didn’t have time to lose it until several days later but I’m glad I made all the arrangements the day before with a wonderful funeral home. They arrived a few hours after she passed and I stayed in the room the whole time while Emperatriz wandered the hospital calling her friends and who knows what else. Yeah that annoyed me highly but as they were prepping her to take her, I stood as they laid out the body bag and they were having a little trouble getting her situated into the bag so I immediately stepped in and started helping them. I didn’t notice the odd look I was getting until I looked up after zipping the bag to her face just not all the way.

They told me, that they never had a family member help them and be so calm. I told the nurse and mortician that this is my mom and going to make sure she is completely taken care of. I didn’t tell anyone for over a year that I did that and everyone was shocked to learn th details.

A few days laters I went to the funeral home to complete everything with my dad that my mom asked to be done. I picked a beautiful urn, necklaces for everyone, and how many certificates of death we needed. A few days later, I was called that her remains were ready and so I picked them up. Poppi asked that I do not let him see it because he was not and as I’m writing this in 2021, he is still not.

One blessing for Poppi was that she passed away the day after their 50th wedding anniversary. This picture is his final kiss to his beloved wife that he was by her side. He has not had anyone else seen this photo up to now. Maybe one day I’ll show them but for now they remain in only my possession.

As much as Nana drove me insane, I still miss her.