When I worked as a newspaper writer, I had to interview two 90 year old women who had been friends their whole lives.

Both women lived on their own and their minds were still sharp. Their good health was amazing and inspirational. I was extremely excited to be able to interview these women who had been alive during the 1910’s and 1920’s.

I brought along a list of questions to ask about what life was like growing up in this small town during that period. However, things did not go as planned.

I began to realize that despite the fact that they were both intelligent and cognizant, 90 years is a long time to hold on to memories. They began to respond, “Gosh that was a long time ago…I don’t know.”

They did tell me a number of wonderful stories that they had recited many times over the years, but the things that weren’t thought of much over the years, had somehow slipped away from their memories.

I suddenly realized that our memories are a fleeting thing, essentially unreliable. I began to realize even my memories from my childhood were falling away. I feel almost silly admitting that I used to think that once a memory became part of your long-term memories, they always remained intact, short of some kind of dementia.

I am now impressed at the foresight of African tribes that retained histories for hundreds of years, by repeatedly reciting their stories. They knew that without telling the stories over and over again, they would be lost.

This newfound realization changes the way I must look at any personal stories written down by family members, or by oral stories that have been passed down. How do we find the compromise between completely ignoring personal stories for fear it is wrong, or else, recording them as complete truth?

Memory retention is not the only problem with storytelling accuracy. Studies pertaining to how memories are formed prove that every time we reflect on a memory, our mind slightly changes the memory.

Often unbeknownst to the storyteller, these memories are changing over the years, morphing from their original form. The more prolific the storyteller, the more at risk they are for embellishment and exaggeration, in an attempt to make the story interesting or relevant to some current circumstance.

We often hear about family histories that include a secret Indian ancestor. In my family history, three separate lines have such a story. I have not found one shred of proof regarding this information.

My great great grandmother was reportedly a Cherokee Indian. My father, who was also a genealogist completely, disregarded the story, stating there was no reason to record the information because there was simply no proof.

Of course, it would not make any sense to write down in the genealogy records that she definitely was a Cherokee Indian, when we did not know for sure. My grandfather told me the story, as it was about his grandmother, so it seemed likely that there could be some legitimacy to the story. 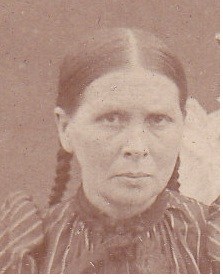 I had one photograph of her, Mary Ellen Henderson Gibbs. She was wearing a typical prairie dress, with her hair in two side braids. Perhaps, my grandfather saw the picture as a child and assumed she was Indian because her hair was in braids.

All of us have our own family stories that cause us to pause and wonder about their accuracy.
My compromise for recording the story came in the form of a simple note attached to Mary Ellen’s genealogy record, “According to her grandson, Archie, Mary Ellen (nee Henderson) Gibbs was a Cherokee Indian.”

I felt better that the story was retained in some form, and was not simply excluded from her history. Perhaps one day, a DNA study will solve this mystery, but until then, the story remains a story.

I now follow these simple guidelines when I come across a bit of family lore:

• Stop story morphing in its tracks. Retell the story as accurately as possible by writing it down or typing it up.
• Avoid inserting your own bias and stick to the facts.
• Record whom the story is about and their relation to the storyteller.
• Record who told the story and in what year it was recorded.
• Use terminology such as “According to…” or “This story was told by…” The storyteller’s role is often just as important as the story itself.

I will remember to be thankful for every story’s unique clues to the past and its elements of truth. I try not to judge the storyteller too harshly when they get it wrong, since it just seems to be the frail nature of human memories.

Kelly E. Lee is a writer, genealogist, and founder of RootPursuit.us. Root Pursuit is a website dedicated to helping family historians and genealogists find resources, connect, and share. Kelly is also the author of “How to Make a Living as a Professional Genealogist.”