Due to a rare birth defect, 32-year-old Jessica Cox was born without arms. But that hasn’t prevented her from pursuing the same passions and dreams as those around her.

Cox considers herself just as capable as anyone else, using her feet to do most of things people do with their hands.

For example, she has a black belt in two martial arts and is able to drive a car…without modifications. She can also pump her own gas,a nd even types 25 words per minute on a keyboard,

Oh and did we mention she puts in her own contact lenses as well?

More incredible though is back in 2008, Cox became the world’s first armless licensed pilot after three years of training. She is now qualified to fly a light-sport aircraft to altitudes of 10,000 feet, and has thus been featured in a documentary called “Right Footed,” because she drives with her feet.

That is why a soon-to-be mom, who found out in her 20th week of pregnancy that her daughter would not have arms, wanted nothing more than to arrange a meeting between Jessica and her daughter.

And it didn’t take long for that meeting to finally happen.

Armless and only three years old, Ruth Evelyn Pranke (nicknamed RE) met Cox for the first time at the premiere for Right Footed.

“It’s been very inspirational to me that she has come as far as she has to overcome her disability – and my daughter has always said, especially lately, ‘I want arms, I want arms,” Karlyn said in an interview with ABC News. “I wanted her to see she doesn’t have to have arms. I wanted her to see all the things Jessica can do.”

Cox said when she meets a child without arms, it feels like she is giving back. “It’s that feeling of ‘Oh, I’m going to be OK. I’m going to be able do everything this woman did,” she explains.

And as for young Ruth, her mother says she was inspired the encounter. So much that for weeks after their meeting, Ruth kept repeating the same thing: “she doesn’t have arms. She’s just like me!” 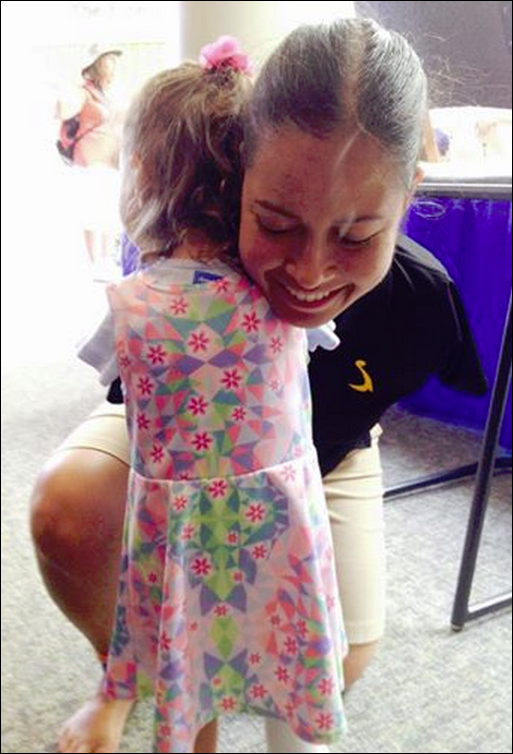