We were honored to get a call from our local Elementary School asking if Notchback KITT would be interested in coming by for a day during their Fun Festival. It is a one-day event held each year that brings the kids outdoors for some fun and activities. And there is no way we would turn down such a great opportunity to inspire our younger generation!

Now the children who attend this school are between Kindergarten and 3rd grade. So most of them probably wouldn’t know what KITT was.  Thus the biggest challenge for me was figuring out a way that I could keep the kids engaged and interested beyond the simple ‘cool look’ that KITT offers.

So I decided to come up with a game using the voice recognition software I use to talk to KITT.  What I did was pre-program a bunch of familiar “child-friendly” songs from movies and TV shows they all likely watch.  My plan was to tell KITT to play one of those songs without saying the name of it.  When the song started playing the first child to guess what movie / TV show it was from would win a prize.

The cloudy day finally arrived and despite some morning drizzle, we got KITT there just in time for the event. The kids were brought outside and given a little pep talk before being let loose. And I couldn’t help but take pride in the fact that out of at least 10 different ‘attractions’, more than a third of the group (maybe 35 kids) ran straight for KITT when the event started.

So up to the driver’s side door they came. I was standing there with KITT ready to have some fun. I explained a little bit about KITT to the kids, helped them understand who he was, and then started our game. I would tell him to “play clip 1” and the first song would begin. The kids were amazed at how I could not only talk to the car, but they also danced like crazy when their favorite songs came on. And of course, all of the hands went up in the air to take a guess at which song it was. In the end, everyone who stopped by really seemed to enjoy it, and all of them got a really cool prize.

It was an extremely rewarding day to be able to bring KITT to this event. Not only have I (hopefully) made my son proud, but perhaps we were able to inspire some of those kids to never give up on a dream…and to pursue it with your heart and soul until one day that dream becomes reality. 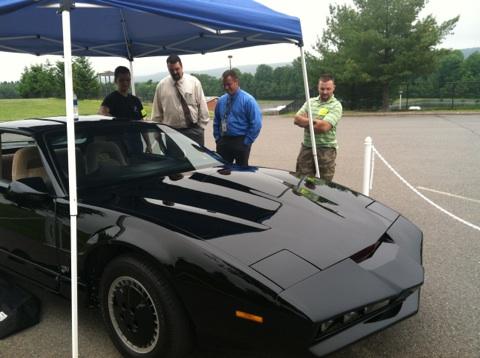 As told by: Joe Fiduccia

Knight Rider & K.I.T.T. are wholly owned and copyrighted properties of Universal Studios, Inc. The car we built was never used in the actual TV show, and forever will remain a custom-made replica. We invite you to follow our story and see how the Make a Difference campaign truly aims to keep the legacy of Knight Rider alive for generations to come.