Marilyn Monroe said it best: “keep smiling…because life is a beautiful thing and there’s so much to smile about.”

Too often people underestimate the power of a smile. We walk the streets virtually everyday seeing nothing but somber faces.  But think about your gut reaction when you’re out and about,  temporarily making eye contact with a stranger walking the other way. When they may smile at you, how do you respond?

We would be willing to bet in most cases, you instinctually smile back.

Smiling is what we are born to do. But as we get older and the responsibilities of life tend to weigh us down sometimes, we often forget that smiling is also what we need to do in order to maintain a positive outlook, even during the most grim circumstances.

And that’s why 6-year-old Jaden Hayes of Savannah, Georgia is in our spotlight today. Because he has made it his mission in life to bring out the smile that he knows everyone is capable of.

Two years ago, Hayes’s father passed away. And just recently he lost his 48-year-old mother as well. So one might say it’s very likely young Jaden will enter depression, and mourn the loss of his parents for a very long time to come. Thus the last thing that anyone would expect from Hayes is a smile.

But a smile is exactly what Hayes is giving to strangers all over the city of Savannah.

On July 22, the orphan kicked off a new campaign he calls the “smile experiment”. His goal: to get grins from grim-faced strangers. And so far, it’s working quite well.

Under the supervision of his Aunt Barbara DiCola, Hayes simply asks strangers for a smile while giving out small toys. His current target is 500 smiles, each of which he documents by taking a picture. And in just a few days, he is already more than halfway there at an astonishing 275 photos.

At first, he was hesitant, but once he got that first smile, he was off like a firecracker,” Hayes’s aunt, tells Yahoo Parenting. “When he smiles, he has a glow. And for a young boy who’s been through so much, to be able to walk up to complete strangers and give them something to make them smile, that is a gift. You can see the power of the love that he feels from these people, too, who share their smiles with him.”

And what’s even better: Hayes is bringing a ray of sunshine into what is otherwise an understandably dark time in his life. Keep on smiling buddy. And the world will smile back. 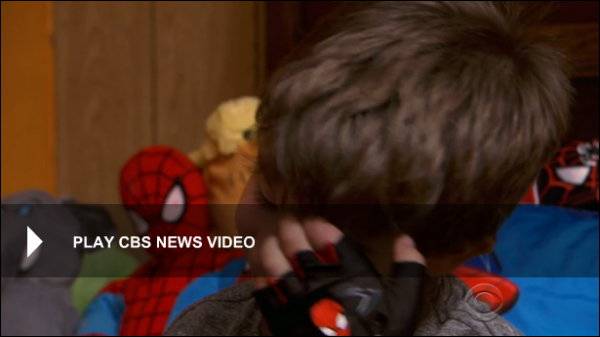 At the time of this article, the mother’s cause of death was unknown and still under investigation.