What lengths would you go to if your spouse was facing a medical issue that became a matter of life and death?

If you are anything like PJ Spraggins, you would spend a year losing 70 pounds.

PJ’s wife, 39-year-old Tracy Spraggins, had been struggling to battle a life threatening disease. When she was only six, she was diagnosed with Lupus, a chronic inflammatory disease that affects her kidney functions.

And if she did not get the kidney transplant she needed soon, the disease would kill her.

But the problem with transplant surgery is the wait time. In Tracy’s case, she was placed on a seven-year waiting list. And doctors were not very optimistic.

That is when her husband, PJ, stepped up to the plate and agreed to get tested in an effort to see if he could be a donor.

And after weeks of testing, the Birmingham, Alabama couple was delighted to learn that PJ was a perfect match.

There was just one major hurdle they were not expecting: PJ’s blood pressure was too high to perform the operation.

That is when PJ took matters into his own hands, and immediately began a strict diet and relentless fitness regime. His goal: lose weight and regulate his blood pressure. All so he could become healthy enough for the transplant operation.

About one year later and 70 pounds lighter, PJ Spraggins was given the green light. And in February 2015, they went to surgery at the Nashville’s Vanderbilt Hospital – together.

Now a year after the surgery, the couple is doing well but still recovering. Yet PJ says he couldn’t be happier, knowing that he did everything he could to give his wife a better quality of life. 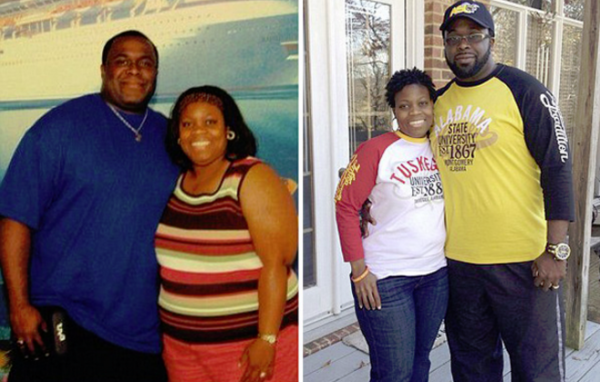 Coincidentally, Tracy was placed on the kidney transplant list in 2013, just a few months after her sister, who was also diagnosed with Lupus, died following complications from a kidney transplant.