18-year-old Austin Roberts was a high school wrestler who seemed invincible. With a 14 – 0 winning streak in just one season, he was a young man who was making school history.

That all changed, however, when Roberts unexpectedly collapsed during a championship match this past December.

Sadly, he died within just a few hours at the Spencer Hospital. The cause of death was determined to be of natural causes.

Roberts’ death hit the school hard, especially the close-knit wrestling community. Hundreds of students were in mourning, but some of them decided to honor Roberts in a very unique way.

Castro-Chavez was an opponent from Estherville-Lincoln Central High School. Falling within the same weight class as Roberts, Castro-Chavez faced him in a previous match and lost. He was there on the day of Roberts’ death, and would have faced the 220-pound opponent again in a future match.

Several weeks after Roberts passed away, Castro-Chavez found himself on the wrestling mats at Spencer High School, the same school Roberts once went to.

Because there was no one to wrestle Castro-Chavez in the 220-pound weight class, he could have taken an instant victory for the match.

But instead of taking six easy points for his team, who was trailing behind 22 – 3, Castro-Chavez did something no one was expecting.

When it was his turn to approach the mat, he made his way over to the bleachers where Austin’s mom, Lori Roberts, was seated. He paid his respects to the family, stating he wished he could face Roberts just one more time because he was such a great wrestler.

He also shook the hands of Dennis Roberts, Austin’s grandfather, who was in attendance that day as well.

Though few people could hear what Castro-Chavez said, virtually everyone in the stands understood what he was doing. As he headed back to the mat, the entire crowd stood and cheered.

With this small gesture that brought tears to more than half of those in attendance that day, high school wrestler Amed Castro-Chavez has reminded the world that a small victory means nothing compared to the moments in life that take your breath away. 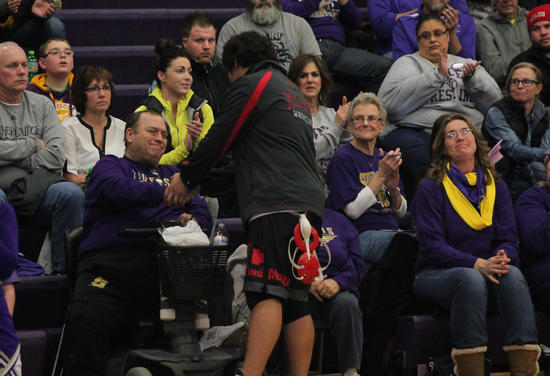 Watch this short but touching video showing the moment Amed foreited the match and paid his respects to Austin’s family: