When you have been sitting in a chair for hours, how do you feel? Body getting weak? Eyes starting to cross? Fatigue setting in? Problems concentrating?

And when you start feeling that way, what is the first thing you do? Go outside for some fresh air? Engage in water cooler talk with your colleagues?

At the very least you likely stand up and walk around a bit.

As adults we must give our minds a mental break and just soak in the sun once in a while, savoring each moment we find ourselves in. You can think of these little bits of downtime as the adult version of recess.

Something we can enjoy whenever we choose to.

Unfortunately though, our children don’t have that same luxury.

Given all of the new standards for academic development in recent years, American children now only get approximately 24 minutes of recess per day. In fact many experts believe this lack of time for recess is contributing to childhood obesity, anxiety and depression, amongst several other disorders.

But according to the American Academy of Pediatrics, recess is “a crucial and necessary component of a child’s development.” And that is why America’s Footprints was excited to learn about the new progam being tested at Eagle Mountain Elementary School in Fort Worth, Texas.

This school has started a new tradition: allotting up to 60 minutes of recess time each and every day for kindergarteners and first-graders.

The students get up to two 15-minute recess breaks in the morning, and two more 15-minute breaks in the afternoon. Children are permitted to play outside and enjoy free open time during each break.

Initially, when you factor in the new educational requirements in areas such as math and reading, teachers were worried that the added recess time would hinder the children’s ability to learn those essentials.

But the program has been running for more than five months, and teachers have already begun to see a positive change.

They claim the kids are actually learning more because they have worked out their aggression, and thus aren’t as fidgety in the classroom. They are able to stay focused on the lesson at hand and have a longer attention span.

The students follow directions better, attempt to learn more independently, and show more initiative to solve problems on their own.

There has even been a drop in disciplinary issues. And parents have stated that their children are more creative at home, and more social.

The teachers at the school have been referring to the breaks as mental “reboots”, allowing students to not only “be a kid,” but to also get in some much-needed exercise while also blowing off steam.

The school has been piloting the program in the kindergarten and first grade classes only. But they have plans to soon introduce the same schedule to another grade every year.

Clearly their approach seems to be working, and we certainly hope that these mini-Footprints become a stepping stone for schools around the country to follow! 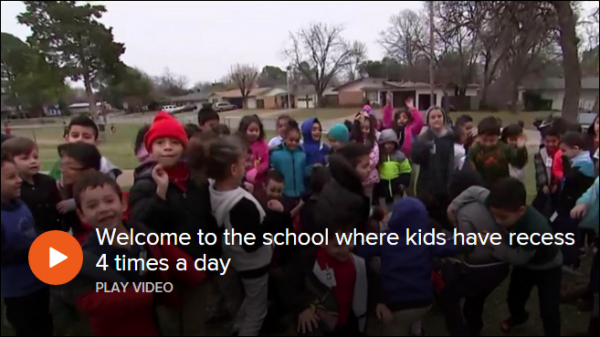