In 1957 Frankfurt, Germany, Elisabeth Andrejeski met John Glass at a church conference. The man who would one day become her husband and father to her two beautiful children.

John was in the US military and Elisabeth was a French native helping missionaries get acclimated to France.

However there was one small problem.

But with the help of French-English and English-French dictionaries, they would write a letters to each other after the conference.

Fast forward three months, John traveled from his Air Force base in Chateauroux to visit Elisabeth in her home town of Ecaillon. When they would talk to each other, they would look in the dictionary of what they wanted to say and would find a way to form the sentences no matter how long it took.

After a successful visit in Ecaillon and five months more of correspondence through letters, John asked Elisabeth to meet him in Paris. When they got together they walked around visiting the Eiffel Tower and different churches. After a while, they went under a bridge near the most important river in Paris where John kissed and asked her to spend the rest of her life with him.

Three months later they were both in Ecaillon and wed in Elisabeth’s home. After they were married, Elisabeth moved to John’s base where they rented a one bedroom apartment. This is where she began her English studies.

During the day she would practice with the other Americans on base and read a single French to English instruction book. In the meantime, she had her son James. 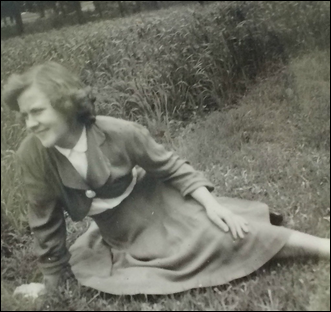 Six weeks after James was born, they all flew to the United States on an Air Force cargo plane. After they were settled in Las Vegas, their new base, the real English studies began. Elisabeth would read newspapers, watch TV, and listen intently to all conversations. Slowly picking up little words here and there.

Although she had no formal tutor, nothing stood in her way of learning the language. No matter how hard it got or how many hours she had to put in, she never gave up.

So the moral of this story: if you put your mind to something, no matter how hard it may be and how scarce the resources, hard work and determination pays off.  Even for true love.

Elisabeth currently lives in Springdale, Arkansas and is the proud mother of her two beautiful children, James and Eli, who are her biggest accomplishments. Unfortunately John is no longer with us, but his memory is close to our heart.

She is also the loving grandmother of Ryan James, founder of Startup Savant, who is using what he has learned from this story to help aspiring entrepreneurs learn how to start their very own business.  In his free time, Ryan even chooses to study French, with Elisabeth.