“Can you look with your x-ray eyes and tell me if my friends are still at the park?”

“Sure. I can see them right now. Would you like to go meet them?”

As parents we do what we can to help ensure our children stay safe and make good decisions. And yes, sometimes we need to get very creative in doing so.

For almost five years now, my son has been convinced that I have what we call “x-ray eyes”. It started when he was much younger, as I traveled quite extensively for work. When I would come home, I would ask him about all the things I missed. And as he shared his highlights with me, he would conveniently leave out the details that he thought might get him in trouble.

So as we talked, I began inquiring about the moments he left out, telling him I was watching what happened with my x-ray eyes.

In reality I already knew exactly what transpired, as my wife would give me a heads up long before these conversations took place. But my son doesn’t know this, yet. And as a result, he believes I have x-ray eyes.

As he continues to grow though, I know it’s only a matter of time before my cover is blown. He will soon discover that x-ray eyes are just the imagination running wild, and that daddy was never really able to see through the surface and into the areas he couldn’t.

So what does a parent say to that? How do I respond when he calls my bluff?

Similar to a child beginning to question the existence of Santa Claus, what do I say when he discovers the truth behind a white lie that has continued for so long?

Simple…just be honest with them.

The truth is as parents, we do have x-ray eyes. Looking back on the hundreds of lessons we have learned in life, we sometimes see beneath the surface and beyond the horizon, far past what our young children are usually capable of.

For example, I see something different when…my son plays outside with our neighbor. I see a young boy who takes life day by day, and does whatever he can to live it up.

Squeezing every ounce of fun out of any given day, he embraces the true meaning of life without yet knowing the burden of the responsibilities that will one-day weigh him down. 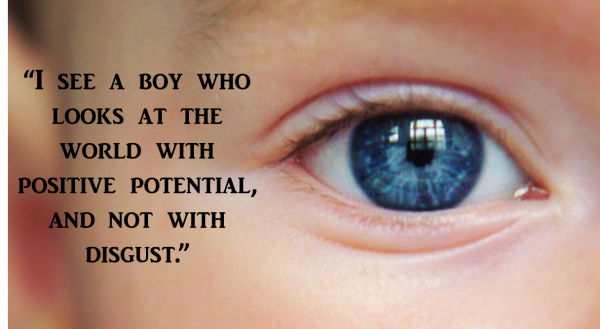 I see something different when…he has a conversation with his friends, I see a boy learning the importance of true communication. A characteristic that will be challenged as he grows in a world of text and email.

I watch and listen from a distance as he holds secret meetings and chats with friends, laughing almost every other minute. Yet at the same time, I can’t help but fear the day when one of his closest friends unexpectedly betrays his trust.

I see something different when…he plays with his toys in an imaginary world. I see a boy whose mind is still developing, and who isn’t afraid to take an adventure into the unknown.

But I also know his imagination will catch the attention of others. I know there are people who may tell him how stupid and childish his imaginary games are, causing him to question whether or not his imagination should still run wild.

I see something different when…he mentions a girl from school who has an attraction towards him. I see him forming a special bond and one-day sharing his first kiss. He will realize what it means to experience true love, and to hold the heart of another soul.

But I also know there is the potential for a broken heart, and that he will need to figure out a way to realize new love once again.

I see something different when…he talks about the positive moments he sometimes witnesses (random acts of kindness, good cop stories, etc.). I see a boy who looks at the world with positive potential, and not with disgust. A boy who hasn’t yet become jaded by the negativity that plagues the news and social media.

I see something different when…he talks about what he wants to do in life. I see a young boy who has dreams he wants to fulfill. As he figures out his purpose in life, he is actively discovering the future that awaits him with excitement.

Yet I also see a boy who doesn’t yet know what it’s like to be rejected. He doesn’t know how it feels when almost everyone around you wants to see you fail, and to uncover the faces of those who want nothing more than to stand proud and say “I told you so.”

What do we tell our children when they asks for the truth behind our x-ray eyes? How do we keep their spirits high while gently helping them understand the difficult experiences that we know are just around the corner in their future?

As parents, our x-ray eyes are a blurred window into their future. We can’t accurately predict where they will end up, but we have a good idea of what will happen based on the milestones in our own journey.

But just like an x-ray can only give you a glimpse of what lies beneath the surface, our eyes are limited to the experiences of our past, and thus may never truly predict their future.

What are some of the things you see with your x-ray eyes?