For the most part, many of us probably look up to our parents in one way or another. Sometimes they will inspire us. Sometime they will push us to be better. And sometimes they give us that extra motivation in life when we so desperately need it.

No matter how you slice it, parents play a vital role in our lives. And on some occasions, they lead by example so well that you want to follow in their very footprints for the rest of your life.

Years ago I was involved in a very serious motor vehicle accident. As a result, I was out of work for quite some time, we lost our house, and I now deal with trying to conquer the fear of getting my own driver’s license.

As if that wasn’t enough, I was told by doctors that I could no longer carry a baby because of the crash.

But while this was a very difficult time in my life that still pains me to even think about, this is not a story about overcoming a car wreck. This is a simple story about family, and why we all need to appreciate what we have before it’s too late.

I am the type of person that cares much more for others than I do about myself. Heck even my animals come before me. I do whatever I can to help people, never looking for anything in return. Normally if something unexpected happens to me (like this car accident) I just go with the flow and deal with it as best I can.

Most times I see these experiences as my own fate, and perhaps life’s way of showing me yet another lesson that I apparently have yet to learn.

When news reached my parents about the wreck and the agony that soon followed, not once did they ever leave my side. They dropped everything to help me in any way they could, and would have given the shirt off their back on a harsh winter’s day with a smile on their face knowing I was warm.

They were there for me…and there for us…working to keep the family bond strong during an otherwise depressing time. In other words, they showed me what a “parent’s love” really means.

And now I want to repay the favor, but I struggle to find the right way to do it.

Though I love both of my parents very deeply, I am not ashamed to admit that I am a “daddy’s girl.” As far back as I can remember, I have always looked up to my dad as a modern day Superman. He would give a helping hand to whomever he could, giving his last bit of change to get something to eat for a total stranger.

Our father / daughter bond was (is) an extra special one. I guess you can call me a stereotypical tomboy. We liked wrestling, lifting weights, and especially enjoyed working on cars together. My dad was a MacGyver, a Jack of all trades, and yet never a master of any.

But in recent years, I’ve noticed that superhero status painfully fading away.

About eight years ago we noticed my father was slowing down. He would need breaks more often, he would get tired very quickly, and felt ill at the slightest bit of physical labor. So much in fact that he could no longer do his job.

He eventually went to doctors. They took tons of tests, and ultimately diagnosed him with COPD. Basically that means if you were to sit down and talk with him, he will seem fine. But if you ask him to talk with you while walking, you would be stopping every ten steps for him to catch his breath.

And for me, it meant something deeper. It was a sign that my Superman was losing his ability to fly.

My father is getting old. Time is catching up with him. And it’s now getting to the point where we have to keep our distance most times, even at just the slightest hint of a cold. In fact, he was recently admitted to the hospital for a serious case of pneumonia. But just like my parents did for me in the accident, I made sure that he had everything he needed and more (all with the help of my mother and fiancé).

Yet as I watch his powers slip away, it kills me inside. My dad will never have the physical strength and resilience he was once known for. And though I accept growing old as a fact of life, the pain is sometimes too much to bear. 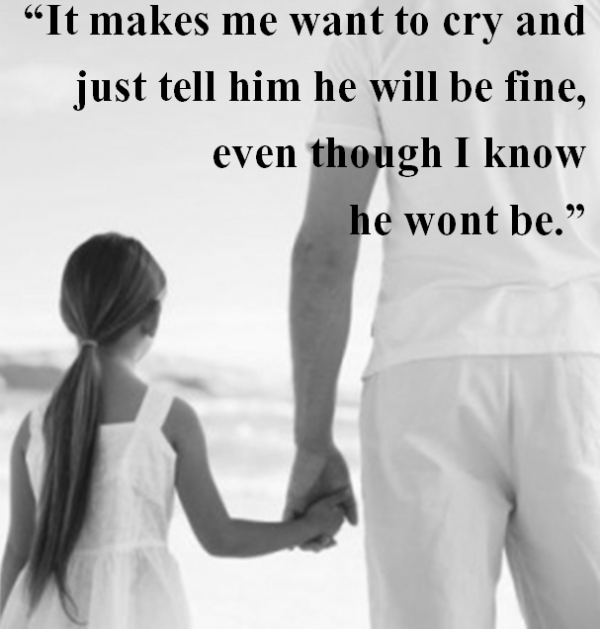 I am starting to realize that the last chapter of our journey together is about to be written. But I will continue to be there for him to the end.

Now I already hear you asking the question: “why did I decide to share this personal story with the world?” And my answer to that is simple: love your family and friends.

Care for them as much as you can, because the day WILL come when you never see them again. You have to be strong, even when you want to crawl into a little ball and just cry.

Yet despite it all, being there to help my family is the greatest feeling in the world.

Spend time with the ones you love. Make memories and hold onto them dearly. We all need to be kinder to others outside of our comfort zone. And by sharing my story today, I hope to show others that there are still people in this world who care…and love.

And in case you’re wondering, dad still rises each morning with a smile. I think if I were to pinpoint one thing that is keeping him around for a bit longer, it is our dream to one day build a K.I.T.T. replica together from the 80’s TV show Knight Rider.

In fact, I vividly remember the day when we both agreed we would make a K.I.T.T. replica before he passes.

I am actively looking for a starter car that we can begin working on, but so far I have been unsuccessful. However my hope is that through this iconic car (that each of us has a hand in building), my father will always be right there in the passenger seat to enjoy a sunset ride…even when life has other plans.