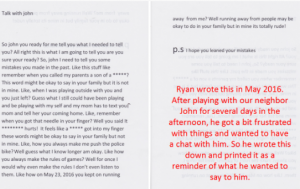 After playing with our neighbor John for several days in the afternoon, he got a bit frustrated with things and wanted to have a chat with him. So he wrote this down and printed it as a reminder of what he wanted to say to him.

Weeks passed and he never said anything to John. As of the day I’m writing this, he still hasn’t. But I am proud of him for wanting to share how he feels instead of keeping it bottled up inside.

I hope it helps him cope with whatever concerns he has.

EDIT: today June 1, 2016, he had the official talk with John. I wasn’t hear but Ania said they sat outside and talked / played for a long time. Ryan even got the letter and read it to John even though his guidance counselor didn’t think it was a good idea. I don’t really know how the conversation went, but according to Ania, Ryan is very proud of himself.

Thus needless to say today is a major milestone in his journey towards adulthood. Way to go little man!