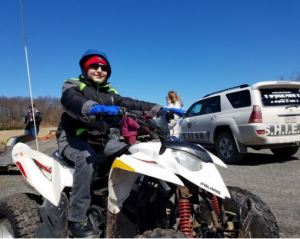 One of the guys I met through Otpimus, Shane Bond, r1ides quads. I happened to mention to him that I was looking for a quad for Ryan but that I didn’t want to buy one until he showed interested in it.  So Shane offered to let us try one of his quads for free!

We met up with him on a Sunday and he took us to his grandfather’s farm. Plenty of space to ride. Both him and I showed Ryan the safety features and how to ride safely. Shane even loaned Ryan a cool helmet.

Ryan didn’t know what we were doing until we got there. Initially he said no, but very quickly warmed up to the idea and got right on. He rode on his own for a good hour before asking if I would join. Shane had a 2nd quad and let me ride his. Though it was a cold day, Ryan and I rode around the property for another hour. He did amazing and picked up the skills with minimal effort. He did very very well for his first time, and is anxious to get out again. Perhaps one day we’ll get an ATV of our own. But for now we’ll stick with renting, as Shane said we can do this again anytime.