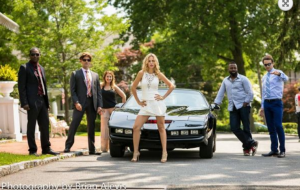 Last year I met someone named Judy San Ramon at a Comic Convention in Long Island.  She was a movie writer and really liked KITT and promised to bring us into one of her upcoming movies.  And this month it actually happened.

I trailered him to Long Island where they filmed him all day long for a movie titled “Fair Market Value”.  Some major players were in the film, including Luisana Lopilato (wife of famous singer Michael Buble).  I even got to meet Michael and chat with him for a few minutes about KITT.