We’ve likely all heard the story about the RMS Titanic, and the epic disaster that resulted in the loss of hundreds of lives.  Well here’s a short story you may not have heard yet: one about the youngest body pulled from the waves – that of a young baby boy.

When coroners attempted to identify this boy, they came up empty.  After a short time of being unclaimed, he was ultimately buried in a graveyard in Nova Scotia, Canada, under a tombstone that identified him as the “Unknown Child.”

He was first thought to be a two-year-old Swedish baby called Gosta Leonard Palsson, whom witnesses had seen being washed overboard as the Titanic sank.  So in 2001, the Palsson family allowed the baby’s grave to be opened for DNA analysis. 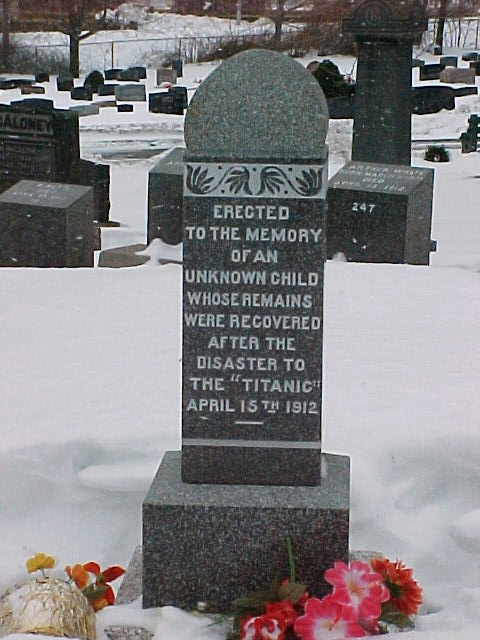 Now nearing 90 years since his burial, only a piece of arm bone and a few teeth remained, but they were enough to prove that he wasn’t a Palsson.

Additional misidentifications occurred in 2004 when the teeth were thought to be those of an infant from 9–15 months of age, and a one-year-old Finnish child named Eino Panula.  But it took seven more years before his shoes finally gave this nameless baby his real identity back.

Researchers took another look at the leather booties kept at the Maritime Museum of the Atlantic, and quickly realized they were too big for a one-year-old child.  The only remaining chid on the passenger list that would fit the size was Sidney Leslie Goodwin, a young girl from England.

This time, the US Armed Forces DNA Identification Laboratory confirmed with certainty that the baby was indeed Goodwin. He had been traveling in third class with his family, all of whom perished at sea.