Not long ago the nation said farewell to Maryland resident Leonard B. Robinson. And while you may not recognize his name, you will likely remember him as the Route 29 Batman who drove a custom Lamborghini dressed up as the Dark Knight, visiting area hospitals to bring joy to sick children.

Robinson first entered the spotlight in 2012, when police video of his traffic stop went viral. The police dash cam displayed a humorous exchange as Robinson explained to police that his vehicle tags were inside his vehicle because a license plate would not go well on the “Batmobile”.

But few people took the time to learn a bit more about the man behind the mask, so that is what we aim to do today.

Robinson made his living running (and eventually selling) a successful building-cleaning business that he started as a teenager. Sure he lived in the millionaire house and enjoyed the expensive dinners. But his wealth also helped bring out his best trait – generosity. Because out of all the things he could have done with his money, he chose to use it to make children happy.

He was inspired to become the Batman through memories of playing with his young son, Brandon, and seeing the joy that the character brought him as a child. So Robinson purchased his superhero uniform for $5,000, and then dedicated much of his time meeting sick children in the Baltimore area.

During his visits, he would hand out Batman books, rubber Batman symbol bracelets and various other toys to kids…all of which he would purchase out of his own pocket (an estimated cost of $25,000 per year).

Signing every item he would hand out, Robinson gave children an opportunity to meet their favorite superhero. Sometimes he would even travel with his teenage son who played Robin. He would drive hours across the state at least couple times a month, and when he wasn’t doing that, he visited area schools to talk about bullying.

Robinson also worked closely with a charity named Hope for Henry, which seeks to bring hope and joy to hospitalized kids around the Washington D.C. area. He appeared at dozens of their events, dressed in full costume as the Dark Knight.

But it might come as a surprise that Robinson didn’t do birthday parties or ‘for profit’ events. He was adamant that his superhero work be limited to doing good deeds, part of a maturation process in his own life. Because in his earlier years, he sometimes displayed an unsuperhero-like temper and got into occasional trouble with the law for fights and other confrontations. So putting on the Batman uniform helped change him.

In an interview with Laurie Strongin (executive director of Hope for Henry) and USA Today, she said “[Robinson] put so much care into being Batman. He was always in character, he talked to the kids like Batman. He provided kids with so much hope and he shared our mission to make these kids happy and whole. He’s such a hero because of how he lived his life.”

And for the short time he was with these children, Robinson helped them completely forget about their sickness.

So today America’s Footprints would like to pay its respects to Mr. Leonard “Batman” Robinson. Though his life came to a tragic end, the work he did in his time here helped extend the lives of countless others. And that alone is worthy of a Footprint in history that deserves to be remembered. 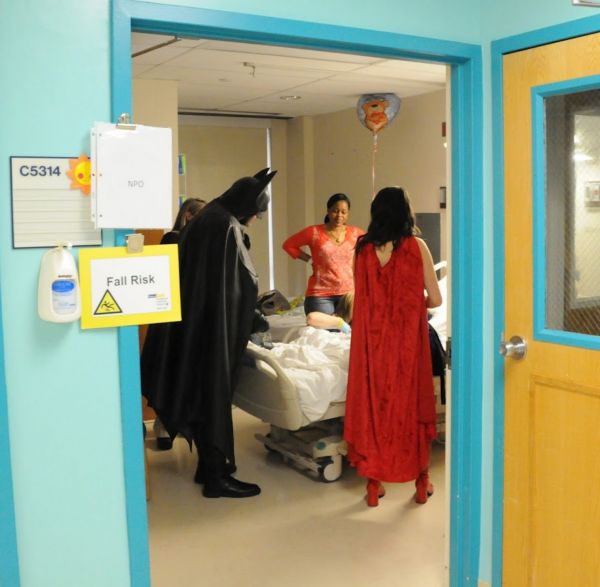