The oldest living crew member of the battleship USS Arizona to have survived the Japanese attack on Pearl Harbor has died in Northern California at the age of 100.

Retired Navy Lt. Cmdr. Joseph Langdell died Feb. 4 at a nursing home in Yuba City, according to his son, Ted Langdell. A tally maintained by the USS Arizona Reunion Association, for which Langdell had served as president, identified him as not only the oldest Arizona survivor, but the last surviving officer from the naval ship that lost 1,177 men — nearly four-fifths of its crew — when it was bombed on Dec. 7, 1941.

Langdell was an ensign on an assignment that had him sleeping on a military base adjacent to the ship in Honolulu on the morning Pearl Harbor was attacked. He spent the following hours and days trying to rescue shipmates from the burning water, preparing for another possible air assault and leading the survivors tasked with removing the remains of the dead from the partially sunken ship, his son said.

“I felt absolutely helpless as I watched the attack,” Langdell told The Associated Press on the 56th anniversary of the attack that drew the United States into World War II. “If I had been aboard, I would have been killed in that No. 2 (gun) turret. That was the one that blew up. It was my luck to be assigned off the ship that day.”

The New Hampshire native spent another four years in the Navy before going to work as an auctioneer, a furniture manufacturer’s representative and eventually the long-time owner of a Yuba City furniture store.

Ted Langdell said his father did not talk about Pearl Harbor during his childhood and returned there for the first time since the war in 1976, when his older son was in the Navy. After that, Langdell took comfort in meeting with fellow survivors and pride in always wearing a USS Arizona hat.

“It drew attention not just to him, but gave him the chance to tell stories,” the son said. “Anyone in the service has stories to tell if you make the effort to listen and to really hear and try to understand what they are saying.”

“Lt. Cmdr. Joseph Langdell: on behalf of all of us at AmericasFootprints.com, we salute you.  Thank you for your service, your dedication, and your commitment to our freedoms.  You may finally now rest in peace.” 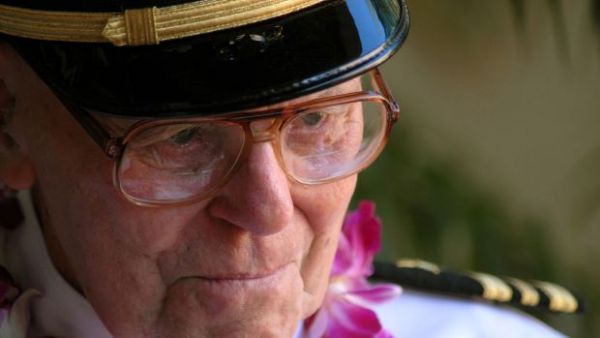