When shopping for groceries, we typically don’t expect to meet someone who will change your life forever.

Especially not someone who is only 16 years old.

Meet Chauncy Jones Black. The teenager was making his way through the aisles of a Kroger grocery store in Tennessee when he approached another shopper named Matt White.

Total strangers to each other at the time, Chauncy asked White if he could buy him and his mother some glazed donuts in exchange for carrying White’s groceries to his car.

The two got to talking, and within seconds White knew the teenager needed more than just donuts. So he offered to take Chauncy on a shopping spree throughout the supermarket.

“When Chauncy approached me, it just tugged at my heart,” White said. “When I looked at him and saw what he was doing and what he was asking for, I said he was my hero.”

As they made their way through the store aisle by aisle, Chauncy began to share his story with White. He currently lives in Memphis, Tennessee with his disabled mother. He is a straight A student with very few resources.

He wants to get a job that will help support him and his mother, eventually becoming a business owner so he can offer jobs to others in his community.

After supplying Chauncy with a week’s worth of groceries, White continued to stay in touch with him. He also setup a GoFundMe page to help support the teenager and his disabled mother.

A page that immediately went viral.

“It’s so rare that we get an opportunity to affect so much change on one life,” said White. “I think back to how many people poured into my life with their generosity, time, money, encouragement, and it brings me to tears.”

As of the date this article was written, White had successfully raised almost $325,000 for Chauncy and his mother. And the donations continue to pour in.

“I cannot thank you enough for caring about Chauncy,” explains White. “This is his big chance, and you’re making it possible.”

Take a look at the personal video White made with Chanucy to help get his story out there.

And if you would like to support their campaign, you can visit their GoFundMe page at Chauncy’s Chance. 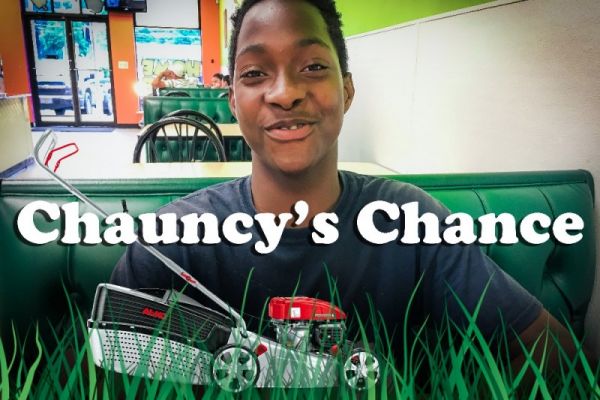