A little kindness can go a long way. Simply holding the door for a stranger, or saying “thank you” to someone who helped can do wonders to lift their spirits.

It doesn’t take much to make a difference. And sometimes, your generosity can go so far as to save the life of another.

Casey Fischer was a college student who stopped at Dunkin’ Donuts one morning for a small breakfast. Upon her arrival, she noticed a homeless man sitting on the side of the road and looking for spare change.

His name was “Chris.”

As Fischer was inside Dunkin’ Donuts, she noticed Chris enter the establishment. He came up to the counter and began counting his change to purchase something to eat.

Recognizing he needed help, and unaware he only had a $1.00’s worth of change, Fischer decided to walk over to him and strike up a conversation. Initially Chris adamantly turned her away, showing no interest in talking to Fisher or even acknowledging her.

But she persisted and ended up purchasing Chris some food and coffee from the establishment with her own money. After which she invited him to sit down for a chat together.

Apologizing for his demeanor, Chris began to tell her his back story. He talked about how his mom died of cancer, how poorly he was treated by others, and how drugs turned him into a person he hated.

He said he all he wanted to do was to become a man his late mom would be proud of.

And all the while Fischer listened…for hours.

Eventually Fischer realized she need to get back to class. But before leaving, Chris asked her to wait just one more minute while he wrote a note for her. He handed it off, and they parted ways.

When Fischer returned to the car and opened it up, she was stunned to read the following words: 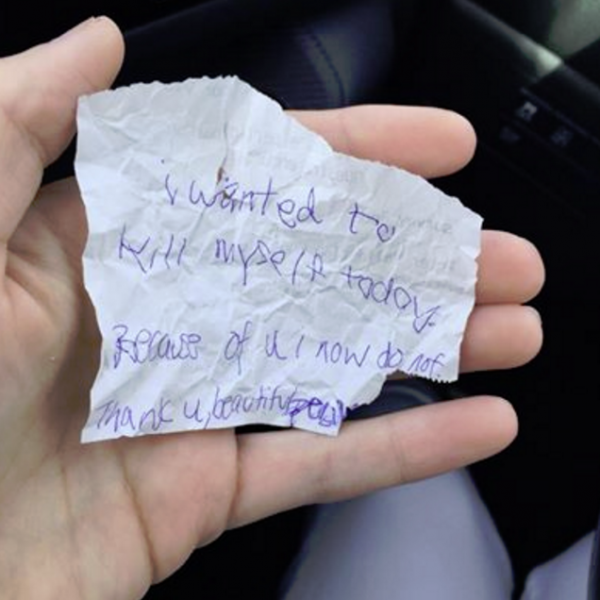 “I wanted to kill myself today, because of u I now do not. Thank u, beautiful person.”

As it turns out, behind the drab exterior, Chris was a decent man who just needed someone to talk to. For reasons that seem to be beyond coincidence, Carrie Fischer willingly answered that calling.

And in the process, her generosity saved the life of another. Proving why her Footprint is worthy of the spotlight in America’s history.

What have you done to make a difference today?