Many of us look forward to those walks in the park or just a simple stroll through the downtown streets. Especially after a long day at work, there is nothing quite like the feeling of the open air to put all of our troubles and stresses aside, even just for a few minutes a day.

Now imagine getting a paycheck every time you step outside for that stroll.

That is exactly how Oak Harbor, Washington resident Russell Carey makes a living.

The 28-year-old loves walking. And with the help of Traci Cellona, a caregiver from Service Alternatives, he has found a way to keep the bills paid while doing it.

A few years ago, the 24-hour care company tried locating a job for Carey but came up short. They do their best in matching a person’s skills with meaningful work, which sometimes includes light office work, janitorial work, or delivering newspapers.

But Carey loves to walk. And since he lives with autism and a brain lesion that causes seizures, none of those jobs would be a good fit for him.

That’s when the idea for Carey’s Signs came to fruition. And with the help of Service Alternatives, he started a business named Carey’s Signs.

For a negotiable rate averaging at just $80.00, his clients get a custom sign and an hour’s worth of walking with it up and down a busy thoroughfare in Oak Harbor for up to six weeks.

And the best part about getting his paycheck: he absolutely loves every minute he is earning it.

Carey’s clients have also mentioned they appreciate his eagerness to work, and his willingness to make something of himself. So in their eyes, the $80.00 becomes more than just an investment in advertising.

Carey’s clients believe they are supporting the local economy and providing work to someone who really wants it.

The Oak Harbor High School graduate grew up in foster care and has been on his own for most of his life. But that doesn’t stop Carey from paying his own way.

He has been supporting businesses for several years, and the response has been positive from all sides. If you would like to book an advertising gig using Carey’s services, you can call 360-320-4081. 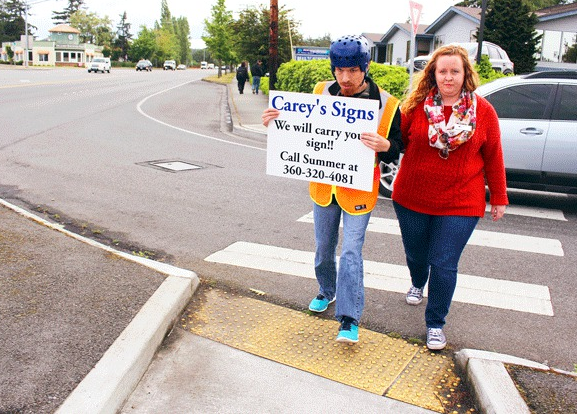 Inspiration for this story came from the Whidbey News Times.