Bullying continues to be a major issue facing young kids in 2015. According to the results of a study by stopbullying.gov, about 49% of children in grades 4–12 reported being bullied by other students at school at least once during the past month, whereas 30.8% reported bullying others during that same time.

Unfortunately young Allison became another statistic of bullying. And it started for her when she was still in elementary school.

Some kids would make fun of her for small things like the Spiderman lunchbox she was carrying, while others would physically attack the 11 year old throughout the school day.

Allison’s mother Aimee had tried all of the conventional tactics. She met with school board members, who even held a group discussion in Allison’s class about the negative effects of bullying.

But according to Aimee, the school failed to take ongoing actions to address the situation. And outside of the one meeting with students, nothing else has been done.

“It’s painful to see your child unhappy, and to feel like whatever you try to do to help them doesn’t have much impact,” said Allison’s mother Aimee. “Those days when she gets in the car when I pick her up and says she has had a good day are a blessing, and those days she looks miserable I remind her tomorrow will be better, and distract her with happier thoughts and activities.”

But that’s when we now get to introduce a young girl named Katie, who offered up something of her own to help shield Allison from future attacks.

Back in 2012, Katie was also the victim of bullying. So a group known as the 501st Legion built her a completely customized Stormtrooper outfit, mirroring the uniforms seen in the original Star Wars movies.

Katie wore the armor at her school’s Halloween parade, during trick-or-treating activities, and for several more events in the coming months. K said it helped her overcome the fear of bullying, and became a protective shield that made her more confident.

When Katie heard about the issues Allison faced in school, she immediately wanted to help. She began asking questions about Allison’s story, wondering if the kids would hit her or if the school had done anything to stop the bullying.

And when Katie learned that this was an ongoing battle for Allison, she decided to give up something that had protected her for years.

With the help of the 501st Legion, Katie prepared to surprise Allison with her armor. But Katie and some of her friends took it a step further by writing personalized notes to Allison, offering their own words of wisdom for the bullied pre-teen. 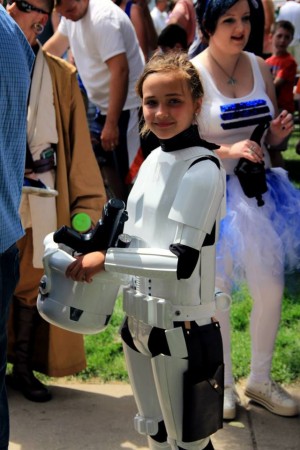 The armor, the handwritten notes, and a few other items were presented to Allison at an Autism Speaks event that same weekend. And a member of the 501st helped Allison suit up for the first time.

The smile on Allison’s face lasted all day. But it wasn’t just the Stormtrooper uniform that lifted her spirits. It was the notes written by Katie and her friends.

“I think the letters from the girls meant more to her than the armor itself,” said her mother Aimee. “It has made her feel like she has ‘yet-to-be-met’ friends out there in the world…something she had forgotten for a while.”

And now all of us know the story of a young girl named Katie who became a Stormtrooper for good, passing on the torch to a complete stranger who desperately needed it. We are confident, Allison, that your days as a Stormtrooper will be filled with adventures worthy enough to be played on the big screen.

May all of us take a page from these young Footprints as inspiration for a better tomorrow.

You can read even more about this story on Chicago Now.