Another police officer is in the spotlight again. This time from Roeland Park, Kansas.

Officer Stamper was called into Sweeney Park on the report of a suspicious man walking through. That man happened to be Samuel Meixueiro, who was on his way home from work and decided to take a short break.

Meixueiro has unfortunately fallen on tough times. The past few years of his life have been nothing short of a roller coaster. He is struggling to make ends meet, he no longer has a home, and has been sleeping in a local church.

Meixueiro does have a job and is doing his best to turn his life around. He commutes from Kansas City to Mission every day for work, which for the non-locals, takes about 45 minutes by car.

In his case however, it’s a five-hour walk.

“Sometimes I have to sleep outside because I want to keep my job. That’s just how it is,” he said in a Fox4KC interview. “I’ve been doing it so I can keep my job.”

So when Officer Zach Stamper arrived to the park on the initial report of the suspicious man, Meixueiro shook his hand and began a conversation.

“As I told him my story he started loosening up. Started realizing I’m not a vagrant. I have a job. I’m doing the best I can,” Meixueiro said.

Stamper decided to give Meixueiro a ride to work that day, but couldn’t shake the story of a human being who could use a helping hand. He couldn’t imagine spending five hours a day traveling back and forth to work, by car or foot.

And that’s where we now get to the best part of the story.

Stamper came back only 30 minutes later with a new bike and a duffel bag for Meixueiro. And in return, all he wanted were two things: a handshake and the promise to stay in touch.

Meixueiro was overcome with emotion. He said the bike meant everything to him.  But even more important was that someone believed in his future.

The two men exchanged information and promised to stay in touch, forming a new friendship that might just be the push both of them need to see the future in a better light. 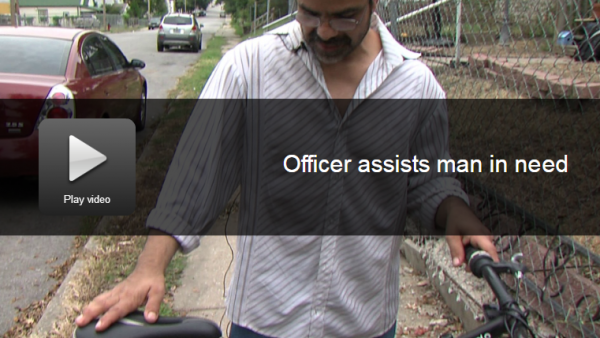