Meet “Super Landon”, a young boy who has unfortunately been battling a sudden and unexpected cancer since the end of March 2014.  But this story isn’t just about a young boy.

This is the story of a moment in his life that began with a random act of kindness, and turned into a day that would create a lifetime of memories.

Landon’s grandmother happened to have a close connection with a NJ State Trooper by the name of Andrew Silipino. So she contacted Silipino to see if he would be willing to visit her grandson.

She explained that Landon loves the police, and that he has dreams of becoming an officer one day.

So last July, Trooper Silipino stopped at 4-year-old Landon Sheppard’s house to pay him a visit. Silipino let him sit in the patrol car, work the lights and sirens, and talk on the PA.

Landon was clearly enjoying the experience, and so was his family.

The visit was short lived as Silipino had to return to work. The Sheppard family was deeply touched by the trooper’s visit, and thanked him for his time.

But none of them could have predicted how much time Silipino still had in store for young Landon.

Trooper Silipino was so inspired by this brave young man that he decided to do something extra special. He contacted Landon’s grandmother and asked her if Landon would like a tour of the Troop “A” Headquarters.

Needless to say she was very excited, and explained that Landon would be thrilled.

So, Landon and his family arrived at Troop “A” Headquarters on July 11, 2014, for what they thought was just a tour. But that’s when the biggest surprise was about to be revealed.

Landon was able to sit in a State Police helicopter, operate a robot from the Arson and Bomb Unit, and watch a K-9 demonstration. The young boy also got fingerprinted by crime scene investigators, and watched their T.E.A.M.S Unit rappel from a helicopter.

Some of the troopers from the helicopter even wore Super Landon tee-shirts, which were made for Landon and have the image of an “L” inside the Superman logo.

But as if all of this wasn’t enough, Trooper Silipino wasn’t quite done.

Long after Landon’s special day was over, Silipino enlisted the help of Expressway Troopers and civilian personnel to arrange for a very special Christmas present for Landon.

The result was a battery powered car that was customized with New Jersey State Police decals, logos, and a customized license plate that reads, “Trooper Landon.” It car was presented to Landon on January 25, 2015 at the Atlantic City Expressway Station.

And now you know the story of one of the good guys. Trooper Silipino went to great lengths to surprise young Landon and to make a difference in his world. Silipino’s comrades speak of him as a humble guy who simply has a big heart.

So today we would like to recognize his outstanding efforts and all of those who organized and participated in both events held for Landon, including the man at the center of it all: Trooper Andrew Silipino. 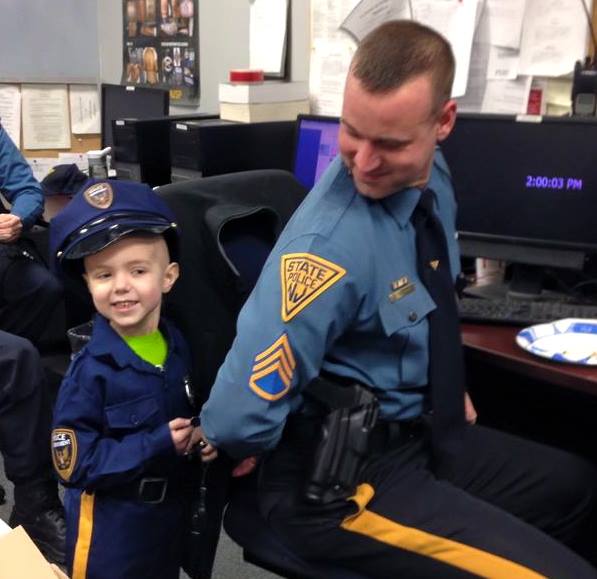 Inspiration for this story came from Random Acts of Kindness