A mother of three from Potterville, Michigan just made a new friend with a complete stranger, thanks to the written words of her 17-year-old son.

42-year-old Michelle Garn has been confined to a wheelchair since suffering a brain stem stroke at age 29. She devotes much of her time to her children, shuttling them to sports practices and school events in a rusted and run-down Dodge Caravan.

So her son, Brendan, decided to write a 400-word essay about his mother, entering it into a contest sponsored by the National Mobility Equipment Dealers Association. The grand prize: a new wheelchair-accessible vehicle.

While Garn was selected by the Association as a finalist, she did not win a new car. But Brendan’s essay did not go un-noticed, and soon caught the attention of a retired business man named Tom Kolassa.

Kolassa is chair of the Olivet College’s Board of Trustees. He first noticed Garn’s story in the Lansing State Journal. He was touched by her strength, and decided to make her a winner in his own special way.

He purchased Garn a near new 2014 Chrysler Town & Country van…customizing it to be fully handicap accessible.

And his $45,000 act of generosity came at just the right time. That same day, prior to this surprise, Garn was struggling to start her old van while trying to make an appointment.

That’s when a phone call came through, telling Garn about the surprise and asking her and the family to take a walk outside so Kolassa could deliver his gift.

After pulling the van into the driveway, Kolassa told her the good news. And Garn could only conjure up one thing: tears.

Kolassa said: “I wanted to tell her, ‘You didn’t win this contest, but you are first place in somebody’s heart.'”

Jason Babcock, sales manager for Freedom Motors, showed the family their new van. He presented them with a gas gift card and walked her through how to use the features. She also learned how to work the hydraulic ramp and how to pivot into the driver’s seat.

When Garn turned to Kolassa, she was at a loss for words. “I don’t know how to thank you,” she said.

And his response: “I grew up having really nothing and I see that,” he said. “I see the hard work she’s doing in trying to support two children. If I can help somebody like that, that’s important, in my life and hers.”

Thus her joy was thanks enough. 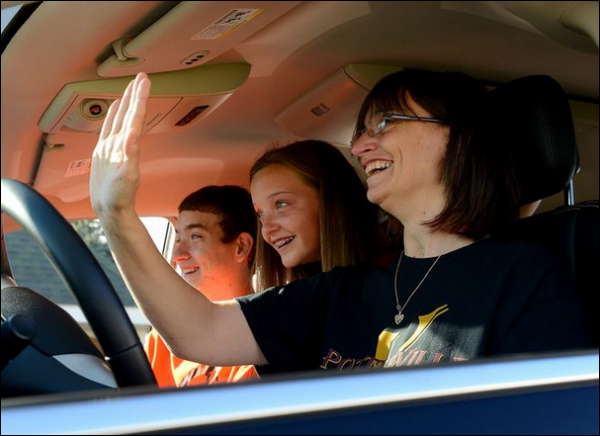