“One man can make a difference.” -Wilton Knight

Those few words became the premise to a television series that introduced one of the most iconic cars of all time. Knight Rider was a show from the early 1980’s that featured a talking car with artificial intelligence known as K.I.T.T., or the Knight Industries Two Thousand.

Along with his driver Michael Knight, played by David Hoff, K.I.T.T. was the car of the future that could do just about anything. Working for the Foundation for Law and Government, Michael and K.I.T.T. were on a mission to make a positive difference in the world around him.

And now almost 35 years later, K.I.T.T. continues to keep that legacy alive…with an old friend, and a new driver.

Notchback K.I.T.T. is a genuine reproduction of this classic car built by the Fiduccia family of northeast Pennsylvania. It has everything from the unmistakable red scanner in the front, to the fancy gullwing steering wheel, to the actual talking voice of KITT himself.

But their KITT is not just a display vehicle for people to admire from a distance. The family works diligently to continue the mission of Knight Rider, and recently made headlines with a visit to a local children’s home.

The Children’s Home of Easton is an organization that takes care of inner city teens who have been dealt unfortunate circumstances in life (parents in jail, abandonment, etc.). They provide children, who would otherwise likely find themselves on the streets, with a caring, nurturing and positive place to live.

During most major holidays (such as Thanksgiving), many of the kids leave the home to spend the weekend with distant relatives. But a few of them have no family nearby, and thus have nowhere to go.

While the staff of the home works hard to make their Thanksgiving memorable, the children left behind don’t always have a reason to celebrate.

But that is when K.I.T.T. and his buddy the General Lee, owned by Scott Killino, came up with an idea to give the kids a memory like no other. 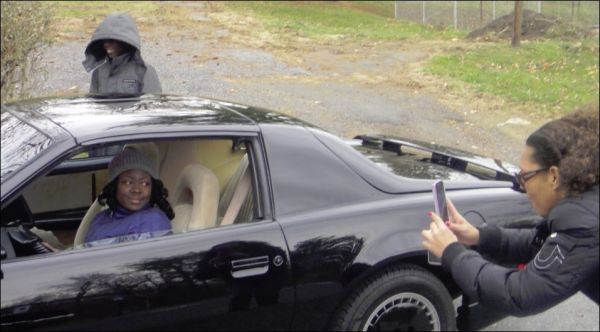 The Fiduccia family contacted the Children’s Home and offered to coordinate a nice surprise for the kids on Thanksgiving morning. The manager, who was overwhelmed at the generosity, graciously accepted their offer and coordinated a time to meet.

On Thanksgiving Day, and to the surprise of all the children, K.I.T.T. and the General Lee arrived at the home. They drove around the corner and into the driveway…scanner running & engines roaring. Coming to a stop at the base of the stairs, K.I.T.T. made the verbal introductions.

“Hello. I am the Knight Industries Two Thousand. How are you?”

And that’s all it took to bring a smile to the faces on these teens. One that would last for days to come.

Thought none of the children knew what TV shows these cars came from, they were eager to get up close and personal. And the dynamic duo gave them all the red carpet treatment.

The teens got the chance to sit inside these iconic cars and learn all about the cool gadgets in K.I.T.T. , as well as the history of the General Lee. They took dozens of photos, and learned more about the shows each car appeared on.

But the drivers were not done yet. Fiduccia and Killino had one more surprise up their sleeves: a ride around town in two badass rides.

“My hope behind doing this is to inspire these children to never to give up on a dream,” says Fiduccia. “I had no experience in building a K.I.T.T. replica, but I wasn’t afraid to try. And now that they know my story, perhaps these kids will go to sleep tonight with a renewed interest that anything is possible.”

It was a cold day, which played havoc with some of the components in both cars. But K.I.T.T. and the General Lee stayed with the kids for several hours, and clearly “made that positive difference” in everyone’s day.

One of the boys, who wished to stay anonymous, had this to say about the experience:

“Thank you for bringing the cars out and sharing them with us. Too many people with cars like these just keep them in the garage and would never let anyone get close like you did. I will remember this day forever.”

So today we honor the contributions of Knight Rider’s K.I.T.T. and the General Lee, and their owners Joe Fiduccia and Scott Killino, for continuing a campaign that was started more than 30 years ago.

Now these kids, who generally have nothing exciting to share with their roommates at the close of the Thanksgiving holiday, by far have one of the coolest stories ever made.

And those special moments now become another memory in the Footprints they will one day leave behind.

We invite you to follow the Fiduccia family and their KITT replica online, and to hire them for an 80’s-themed experience like no other! 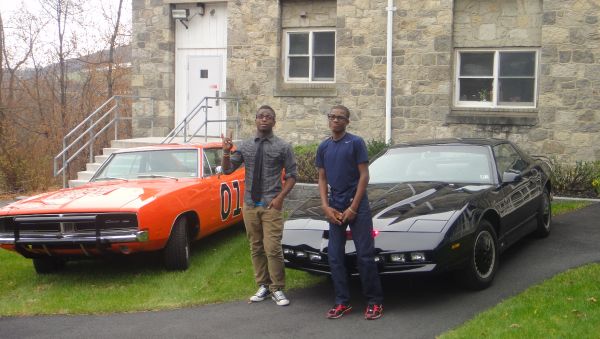