K.I.T.T. was a famous car from the 1980’s television show Knight Rider. Working with F.L.A.G. (the Foundation for Law And Government) and Michael Knight (played by David Hasslehoff), K.I.T.T. was the car of the future with artificial intelligence that could do just about anything.

After four seasons, the show ended its run in August of 1986. But fans today STILL rate K.I.T.T. as being one of the TOP FIVE MOST FAMOUS cars of all time.

And unwilling to let the show become lost in history, the Fiduccia family or northeast PA is doing their part to keep both KITT and the show’s mission alive and well.  Because they have taken it upon themselves to not only build a working version of the famous talking car, but they also have started a campaign to use their KITT replica for good.  Thus continuing the legacy Knight Rider left behind over 30 years ago.

“One thing I’ve learned in taking KITT out on the streets is that he gets a lot of attention,” explains the car’s owner Joe Fiduccia.  “But I have also realized that he still has the ability to make a diffrence in the lives of people all across the country. Regardless of age, race, gender, or demographics, when people see KITT, they are instantly united.”

Fiduccia tells us that most people will instantly smile when they see KITT out of the corner of their eye.  Some will literally scream in excitement, while others will stop and talk about the car with their children, who typically don’t know what Knight Rider was.

“People would surround the car and begin conversing with complete strangers about the car and the TV show,” explains Fiduccia. “And even if it was just for a matter of seconds, it was clear to me that our KITT helped bring people together at a time when they otherwise would’ve just kept walking in opposite directions.”

For anyone who remembers Knight Rider really well, you might also recall a famous quote from the first episode of the show.  Wilton Knight, KITT’s original creator, told Michael Knight “one man can make a difference.”  And subsequent episodes would always stay true to Wilton’s last words.

So in honor of that legacy, the Fiduccia family has started the “Make A Difference” campaign under the name NotchbackKITT.  In short, they aim to continue the legacy Wilton Knight first bestowed onto Micahel, using their KITT replica as a true mascot for good.

“Our goal to do whatever we can to continue bringing joy and unity across the country,” Fiduccia tells us.  “We have brought KITT to festivals, conventions, children’s homes, and much more.  We have coordinated individual meetings with Knight Rider superfans, we provide tips and advice to others who have an interest in building their own replica, and we do our best to educate the younger generations about the importance to ‘make a difference’ in their own life.”

And virtually all of these appearances are done at their own expense.  Whatever minimal profit they make goes right back into the car and helps them fund their next appearance.

Fiduccia tells us: “I have a met a lot of great people along the way, including many star car owners who also use their replicas for good.  But when people ask why I am doing this, my answer is always the same: because at the end of the day, I believe in making a difference.  KITT was a car that was created to do good in this world.  And now it’s my honor to help continue that legacy with our version of this 80’s icon.  Besides, the world can definitely use more ‘good’ these days.” 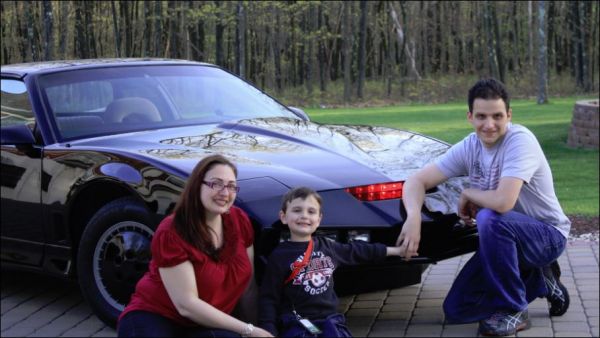