A survey conducted by Wilder Research recent revealed an astonishing number of homeless citizens living on the streets of Minnesota. Their one-day count throughout the state yielded 10,214 homeless people, and that includes more than 3,500 children as well.

So when we hear about a local small business who made a conscious effort to bring those numbers down, we take notice.

25-year-old Cesia Abigail Baires is the owner of Abi’s Café in Minneapolis. One day a homeless man named Marcus walked into the café asking for spare change.

Now in many cases you might think the store’s owner would just turn them away, or at most give them some change and maybe a bite to eat.

But what Baires did instead has the entire community praising her efforts.

The two got to talking, and Baires asked Marcus why he doesn’t have a job. Holding his head down in shame, Marcus said he has racked up a long list of felonies over the years. As such, employers are hesitate to bring him on board.

And though he owned up to his mistakes and wants to turn his life around, he feels forced to beg and steal on the streets in order to survive.

So instead of sending Marcus out the door, Baires decided to give him a job washing dishes for the day. And after just two hours of work, she realized it was time to offer this man a more permanent position.

But her decision to bring him back again wasn’t just because of the good job he did cleaning the dishes.

At the end of Marcus’ first day helping out, Baires offered him a sandwich. Before eating it, Marcus decided to wrap the other half in foil, and bring it outside to another homeless woman on the street.

That random act of kindness sealed the deal for Abigail.

Marcus is now a regular part-time employee at Baires’ café, working two-hour shifts almost everyday. They have even started a program to help Marcus learn how to save money, where 10% is taken from his paycheck and set aside.

She goes on to say: “just like Marcus, I had my help. They believed I could do it. People need to have someone believe in them.”

Baires shared this story on Facebook to encourage others to help those who need it. And her post went viral almost overnight. As of the date this article was published, it was shared more than 52,000 times and received more than 7,000 comments. 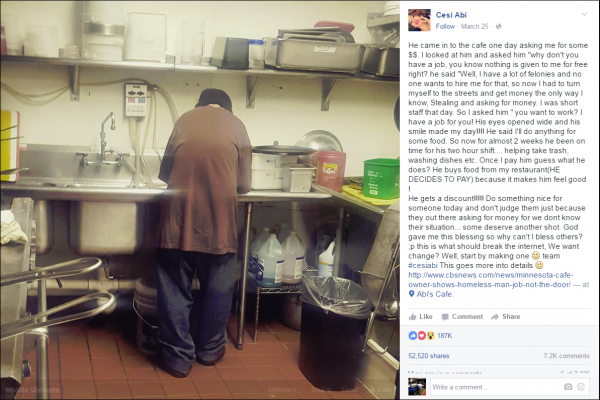