When you were in elementary school, what clubs were you a part of? Science Club? Art Club? Yearbook Committee? Guitar Group?

How about “The Gentleman’s Club?” And no, we are not referring to those scantily clad establishments.

The Gentleman’s Club, more recently changed to the name “Boys With Purpose,” is the newest addition to Memminger Elementary School in Charleston, South Carolina. Led by Raymond Nelson, the club has one purpose: to help young boys learn a valuable life lesson.

Once a week, members of the club come to school looking dapper in their best attire. Over 60 boys from first through fifth grade walk into the classroom sporting full suits, sport coats, and even tuxedos.

And throughout the day, not only do they walk and talk with added confidence, but every one of them enjoys the barrage of compliments by both teachers and their fellow students.

“I was thinking maybe if I have the boys dress for success,” Nelson said in a WSMV interview. “A lot of my students perform well when they know someone cares about them. [And] when was the last time you saw someone fighting in a tuxedo?”

In addition to dressing their best, the students also learn the etiquette of being a gentleman, including how to shake hands, the importance of opening doors, and how they should address their elders.

And since a romantic relationship isn’t typically the first thing on the minds of elementary school children, Nelson uses their sisters, mothers, and teachers as examples.

The club is open to all boys in Memminger Elementary. And for those that don’t have a suit or fancy outfit, Nelson borrows them from his stockpile of donated jackets, vests, and ties

Nelson has worked with at-risk children, and believes his program is especially beneficial to the children who don’t have a father figure at home. He says his club is not intended to take the place of an absent father, but rather to fill a void with certain teachable moments.

Boys With Purpose has been such a hit that other schools in the district have also started to inquire about starting similar clubs, for both boys and girls. 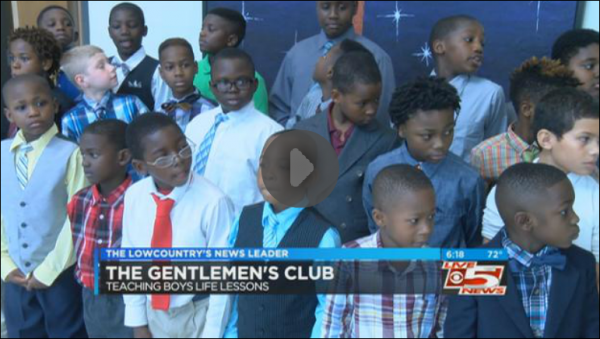 Boys With Purpose has also been recognized by Comedian and TV Host Steve Harvey.