Most dads will likely agree that having a daughter introduces you to an entirely new world of fashion. From the colorful wardrobe options to the fancy makeup styles, just learning how to get your child ready for school in the morning can become quite the challenge sometimes.

Florida resident Philippe Morgese is the father of a young girl named Emma. He became a single dad when she was only a year old. And as her daughter continued to blossom, he quickly realized he needed to learn the ins and outs of the fashion trade.

So he started learning with something simple: her hair.

In the beginning things were easy. He would put a few hair clips in and all was good. But then young Emma moved on to pigtails, and soon the more complicated hairstyles started to take shape.

But he practiced daily. And soon he actually became quite good at styling his daughter’s hair. So good in fact that he now considers himself to be an expert.

Emma’s hair gets a brighter spotlight sometimes than her wardrobe, with friends and even strangers complimenting her newest hair style and asking how it was done.

Through interactions with other parents, Morgese starting learning that he was not alone in his struggles to help his daughter with fashion. Dozens of other local dads were genuinely interested in learning how he did her hair so well.

As a result, Morgese came up with the idea of organizing some classes for the dads who were eager to see what he has learned. So he brought a small group of men together and showed them some awesome hairstyling techniques they could all use for their daughters. 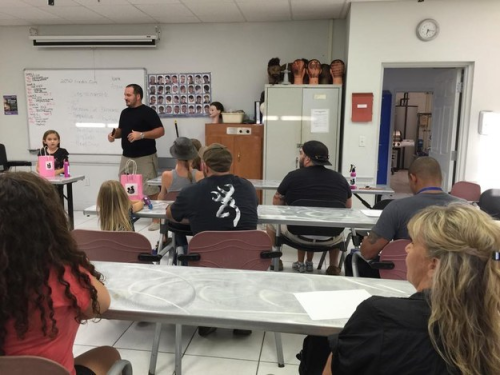 But this first class was just the first link in his chain of ‘making a difference‘.

“I get a lot of credit for doing her hair and hear compliments about my role as a father because of it,” said Morgese in an interview. “I want other dads to be able to experience that.”

Once he learned about the positive impact his small group session had on these fathers, Morgese looked for ways to open up the doors for other dads to take advantage of the same opportunity.

So he contacted the International Academy beauty school and asked if they would be willing to donate some free space for him to teach new classes in.

The academy was more than willing to help, and soon the buzz about his 100% free Daddy Daughter Hair Factory sessions spread like wildfire throughout the community.

With more classes on the schedule and more people attending, Morgese said he feels like a better dad.

“When you hear ‘you are such an awesome dad,’ you start to believe it and let go of the mistakes you make as a parent.”

You can follow their story and see their latest schedule on their Facebook page at Daddy Daughter Hair Factory.