Flint, Michigan has been dealing with a water contamination crisis since April of 2014.

As a result of corrosive water from the Flint River, upwards of 12,000 children have been exposed to drinking water with high levels of lead, and they may experience a range of serious health problems because of it.

So when Isiah Britt of Gainesville, Virginia heard about the water crisis, he decided to begin a campaign that would eventually help every grade school student in the city.

Britt learned that the students at Flint’s Eisenhower Elementary School could not stay clean throughout the day, afraid to wash their hands with water because of the contaminants…with some going weeks at a time without showering for the same reason.

Despite living almost 600 miles away, Britt wanted to find a way to help these kids stay clean. So the seven-year-old asked his parents to send hand sanitizer to the school.

The family setup a GoFundMe campaign with an initial goal of raising $500.00, which would have been enough for 20 cases of hand sanitizer (one for each classroom). But his efforts quickly went viral, and Britt was able to bring in more than $10,000 in just two weeks time.

That money would be enough to supply every single classroom at all 12 elementary schools with sanitizer. And if the donations to his campaign continue, the family plans on supplying sanitizer to local daycare facilities and women’s shelters.

As you might expect, the second grader is happy he could find a way to make a difference.

“That was the best day of my life, trying to help a different school. It doesn’t matter if you’re small. It doesn’t mean you can’t do big things,” Britt said. “I was so excited for what I’d done to try and make the world a better place.”

If you would like to support Isiah Britt and his mission to help the kids of Flint, Michigan, you can visit his GoFundMe page.

Check out the original news video about Isiah’s story from WTVR below: 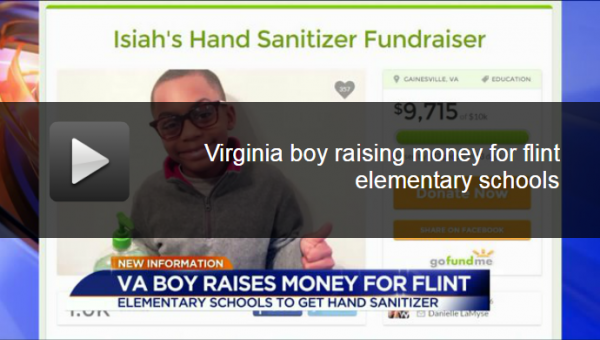 And watch his YouTube video as he shows his love and appreciation for all of the help he has received!