When you were in elementary school, there was typically one class we always looked forward to: recess.

The chance to get out of the classroom and run around on the playground was the perfect break in an otherwise mundane school day.

But for the 5th grade students at Mark Bills Middle School in Peoria, Illinois, recess is now an option they would rather give up in support of helping a fellow classmate feel welcome.

That classmate’s name is Rhemy Elsey.

Elsey is deaf. He uses a combination of sign language and an interpreter to communicate throughout the school day. But in an environment where virtually no one else knows the same language, Elsey was feeling a bit isolated. And having an interpreter by his side all day didn’t help with the social aspect either.

That’s when some of his fellow classmates came up with an idea to make Elsey feel more comfortable. The class decided to give up one day of recess each week to form a Sign Language club, all so they could communicate more effectively with Elsey.

Elsey’s interpreter, Tammy Arvin, leads the club every Wednesday. She has taught them the basic signs in a variety of topics, and has so far been very pleased with how eager the students are to learn it.

Arvin has already seen improvement in the communication between Elsey and his classmates. She believes the club has helped the kids have more natural conversations with Elsey, which has made everyone feel more comfortable together.

Arvin believes the new club is giving students a new appreciation for things they weren’t aware of. She says the students are learning about diversity and the world around them, even though to them it doesn’t feel like learning.

Click below to see the original news story that first aired on WMBD. 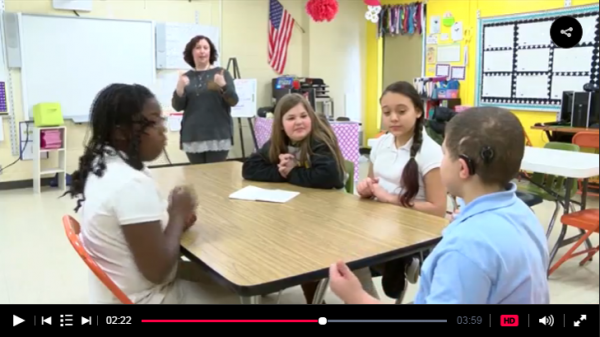