Have you ever felt a calling? That higher power you can’t explain, and the voice which consumes your every thought?

Few people in life can honestly say they have found their calling. And even fewer can say they actually listened to it.

Meet 28-year-old Eugene Yoon, who some would say made the craziest decision of his life last year…in an effort to help a total stranger.

Eugene’s journey started out as a calling. He felt something inside telling him that he needed to do one major act of kindness. Not just opening the door for a stranger or leaving a higher tip for a restaurant waitress.

His kind act had to big, like nothing he had ever done before. The problem was, he had no clue what to do or who to help.

Two months later, he saw a random video pop up on his Facebook page of a man he never met named Arthur Renowitzky.

In the video, Renowitzky was seen in a wheelchair. He was paralyzed eight years ago after being mugged and shot. But what struck Yoon was the shirt Renowitzky was wearing.

Yoon realized at that moment – this was man he was supposed to help. And it became his mission to find a way to make Renowitzky walk again.

But how? Yoon has a film degree and came in with no experience in the medical field. So how was this young adult supposed to make Arthur walk again?

In speaking with Renowitzky and after doing some research, Yoon learned about an exoskeleton device designed to help people walk again.

However, the price tag was $80,000, which was a far cry from the small savings Yoon had in reserve.

And this is where the story takes a turn no one would predict.

Staying true to his initial calling, Yoon decided to quit his job at a research company and hike from the California-Mexico border to Canada in an attempt to raise funds for the new exoskeleton.

Again – for a total stranger.

During his hike, Yoon would post videos of the adventure and would ask people to donate to his cause. And when he was halfway through Washington state, Eugene discovered he had reached his fund-raising goal.

With the money he had raised, Yoon was able to buy the exoskeleton for Renowitzky. The two eventually met in person, with Renowitzky walking down a hallway to show his appreciation. And since then, they have formed a special bond that runs deeper than their family genes.

As to the origins of Yoon’s “calling,” they remain a mystery. But when he decided to take that leap of faith, he ended up making a difference in someone’s life that no one would have expected. 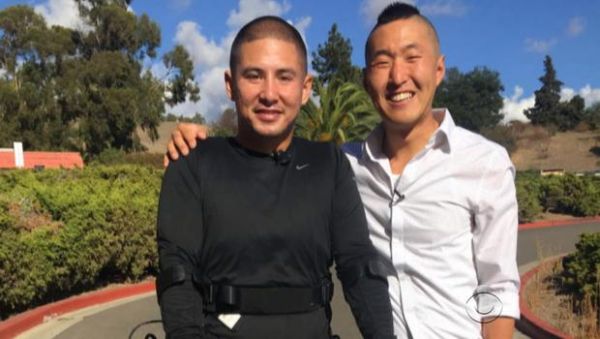