So where were you this past weekend?

Judging by the $250 million dollars in revenue, you were probably doing the same thing as everyone else: enjoying a $15.00 bucket of popcorn while watching the new generation of Jedi masters.

Star Wars was finally released this past weekend, and is rapidly becoming one of the biggest box office releases of the modern day.

Hordes of people had no problem forking over between $7.00 and $30.00 per ticket in return for a few hours of stellar entertainment.

But it’s not the cost of watching a movie that we aim to spotlight today. It’s the campaign of good that all started with a 17-year old from Rosemount, Minnesota, who came up with a radical plan just in time for the holidays.

With the help of his brother and parents, Alex Huot decided to rent out an entire movie theater for his friends and family to watch Star Wars on the big screen. And while some people do this just because they can afford to, Huot has a different reason in mind.

Instead of charging each of them admission, he asked everyone to bring a donation for Toys for Tots.

“Around the holidays, it’s always a good feeling to give something,” Huot said in a Fox interview. “It’s good to give to people — all the families who aren’t as fortunate as we are.”

Huot spent $1200.00 to rent out the theater. He then sent invitations to all of his family, his close friends, and even some classmates to enjoy the Thursday night showing together.

With toys in hand, Huot was able to fill 97 seats at the Marcus Rosemount Cinema, while also ensuring children around the country would have a very Merry Christmas.

So today we would like to recognize Alex Huot for his incredible generosity, and for leaving behind a Footprint that is worthy of the spotlight. Way to go Alex!

Click the image below to see the original news clip where Alex shares more about his story! 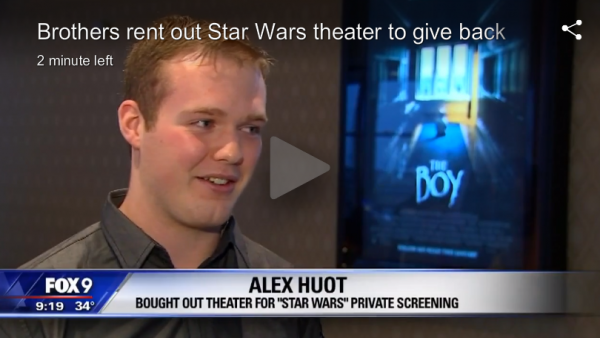