The most poignant number in her life at the moment: 118.

That is the number of names she saw when viewing an online list at the beginning of the year, honoring law enforcement officers killed on duty in 2014, and the number of miles she then committed to run this month in their memory.

Multiply it by 100, and it is also the number of dollars she aims to raise to help provide ballistic vests for police officers whose departments do not provide them and cannot afford to purchase them on their own.

“(One-hundred-eighteen) families lost a mother, father, husband, wife, son, daughter, brother or sister,” she wrote on her fundraising page. “This should not happen! These men and women put their lives on the line for us and they need to be thanked for that.”

MacKenna’s family represents a long line of military and law enforcement roots. Her father, John Gosart, is a former police officer and current investigator for the Clayton County, Ga. district attorney’s office. Two of her great-uncles, Bill and Jack Berti, are former Dallas Borough police officers, and Bill was also a borough council member overseeing the police department, until his death in 2001, when he was then succeeded by his daughter, Barbara Barnes, of Dallas.

“We are exceptionally proud of her,” John Gosart said of his daughter, adding he had no idea her goal to run 118 miles in January would turn into something so big.

Her original fundraising goal was $500. But MacKenna’s GoFundMe Run For The Blue campaign brought out the good side of humanity, with 159 people answering her call to “be the good while these officers protect us from the evil,” collectively donating a total of $8,115 in just the first 18 days of the online fundraiser, which will continue through Jan. 31. 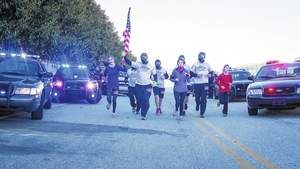 Now, she aims to reach $11,800 — $100 in memory of each fallen officer on her list. The funds will benefit the Armor of God Project, a non-profit Christian ministry which provides ballistic vests for the protection of law enforcement officers.

When asked if the burden of the 118 lives weighs her down when she is running, the seventh-grade Community Christian School (Stockbridge, Ga.) student said the opposite is true: it motivates her.

“When I start to get a cramp or I want to stop,” she said, “I don’t let myself, because I have to get in the miles for the selected officers for the day. Thinking about the fallen officers and praying for them and realizing they did a lot for me, and the pain I’m going through when I’m running is nothing compared to what they went through and what their families are going through without them.”

Inspiration for this story came from My Dallas Post.