Tragedies occur all the time. But sometimes a touching story emerges from those tragedies that deserves the spotlight.

Back in June, an 18-year-old named Brent Price was killed in a car accident. He recently graduated high school, and had plans to attend college.

His death hit the West Memphis community hard. Shortly after, they all came together at a local park for a candlelight vigil. And at the vigil they setup a bucket to collect donations to help with the funeral costs.

That same evening, a 10-year-old named Max Morris was walking past the vigil and stopped to see what was happening. Though he didn’t know Price, he felt he needed to do something to help.

Max made three separate trips to house to get some money. He started with $3.00, then came back again to get some loose change from his mom’s purse.

The pre-teen came back a third time and emptied out everything in his piggy bank, placing all of it into the donation bucket. In total, young Max donated about $30.00.

Max Morris had been saving that money for over five weeks to help him purchase a guitar. But that didn’t stop him from doing the right thing.

Word quickly spread about Max’s selfless act. Local news networks picked up his story, and a local newspaper even featured him on the front page.

That’s when you can his random act of kindness came back to him full circle.

During an interview with the WHBQ news team at the same park, a man named Don showed up and surprised Max with a near new guitar.

That same interview, and the very moment Don surprised Max with the guitar, are below. Watch how the story unfolds…and discover the remarkable bond that was formed in the wake of a teen’s tragic death. 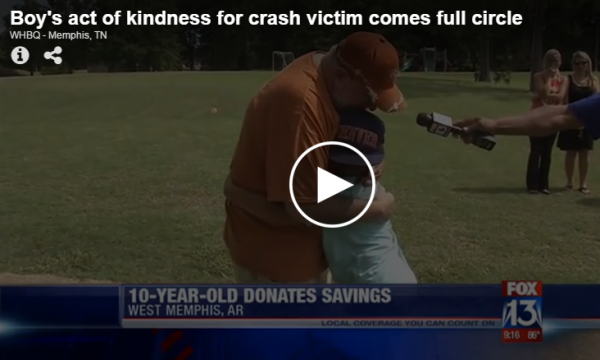